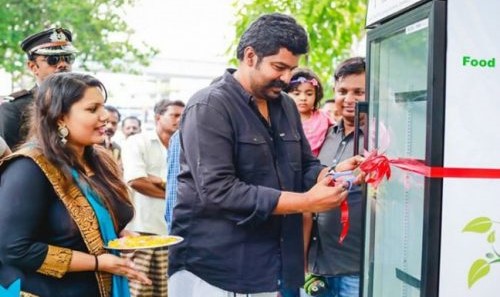 The owner of a café, Minu Pauline, believes that community is more important than money. She installed a sidewalk fridge to be able to feed the homeless in the community. Minu also hopes it will teach citizens not to waste food.

The fridge, fondly dubbed Nanma Maram, which means Tree of Goodness, is open 24-hours a day, seven days a week, and stays unlocked. People who are in need are encouraged to take from the refrigerator at any time, for any reason, with no questions asked. The restaurant plans to keep the refrigerator stocked with at least 50 meals a day, though on some days, Pauline stocks it with as many as 100 meals. These meals are in addition to the leftovers that their diners donate.

Pauline told HuffPost that the idea for the fridge came to her late one night when she saw a lady searching through a trash can for food. As she watched, she had a terrible thought:

“That the woman had been sleeping and was woken up by her hunger, so she had to go in search of food instead of sleeping.”

“She was especially saddened,” reports HuffPost, “because that particular night, her restaurant had made a ton of food that they could’ve easily given the woman, instead of her searching for it.”